Humanity has always despised change and every now and then they erupt with such rage and violence that simple conscious cannot stand its toll. This all-consuming rage directed at whatever it is that has caused this change upon the delicate society. For over a decade we have been preparing for just another of these great changes. A change is coming where the old freedoms have to be re written with new freedom.
Though every time we say that it’s just another change we realize it’s no passing matter. The change how small or great is never the real problem but what happens when the change comes is what that bothers. As someone wisely said “The night is darkest before dawn”, so is the nature of every change. Just before the change all reduce to chaos, all become dangerously unstable, books are to be rewritten understandings are to be changed. The true colour and nature of change brings forth the rue colour and nature of the ones whose lives are about to be rewritten. Some of them accept, some resist, others fight and when the change is larger and ever the more radical the resistance is higher.
For any change to take place in a society the society has to mature and a considerable amount of consciousness has to evolve and only when a society so becomes mature and potent that the change happens. And when the change is seen through and the perils of the darkness have been abolished comes solace, a deeper understanding of self and self-righteousness.
But then again we ask ourselves why change, can’t we live in the apathy of the world and let chaos be chaos? The truth is human beings are totally and completely incapable of handling serenity. Once freedom has been seen humanity cannot rest until this freedom has been established. Many lay there life for ideals far greater than themselves and in this process they become the ever remembered symbols of change.

Humanity has always been an optimistic species and even when subjected to darkest of hours they tend to find the way to light. Unlike what the majority of world believes humanity is not a lost cause, they are in fact lazy but never lost. As duly noted by one eminent mind that humanity tend to act only at the precipice of danger. They like the stupid frog sits in the water as it simmers only realize the danger when the water around it starts boiling.
The time is ripe and humanity has made the duly awaited leap. Now all that remains is the change itself and when the time is right a spark will fly and that spark will ignite in us all a flame. A flame so glorious that it cannot be extinguished by any one or any power and that spark will see it through that humanity is changed for the better once again.
“You only live once, but if you do it right, once is enough.”
― Mae West

Pages off Life: Date a Girl Who Reads.

I Just stumbled upon something while blog-hopping and I just had to reblog it. I found it in a rather amazing blog by the name of seongyosa who working as a missionary teacher in South Korea. The article was titled “Date a Girl Who Reads”, which has been retained by me. It is my understanding that she itself got it from another blog by Rosemarie Urquico. Now this is a viral literary essay on the internet.
When I read this article I just had to publish it again, it is so beautifully written and I loved it so much. 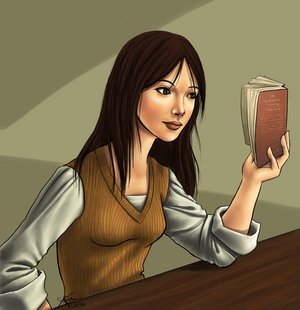 Date a girl who reads. Date a girl who spends her money on books instead of clothes. She has problems with closet space because she has too many books. Date a girl who has a list of books she wants to read, who has had a library card since she was twelve.
Find a girl who reads. You’ll know that she does because she will always have an unread book in her bag. She’s the one lovingly looking over the shelves in the bookstore, the one who quietly cries out when she finds the book she wants. You see the weird chick sniffing the pages of an old book in a second-hand book shop? That’s the reader. They can never resist smelling the pages, especially when they are yellow.
She’s the girl reading while waiting in that coffee shop down the street. If you take a peek at her mug, the non-dairy creamier is floating on top because she’s kind of engrossed already. Lost in a world of the author’s making. Sit down. She might give you a glare, as most girls who read do not like to be interrupted.
Ask her if she likes the book. Buy her another cup of coffee.
Let her know what you really think of Murakami. See if she got through the first chapter of Fellowship. Understand that if she says she understood James Joyce’s Ulysses she’s just saying that to sound intelligent. Ask her if she loves Alice or she would like to be Alice.
It’s easy to date a girl who reads. Give her books for her birthday, for Christmas and for anniversaries. Give her the gift of words, in poetry, in song. Give her Neruda, Pound, Sexton, Cummings. Let her know that you understand that words are love. Understand that she knows the difference between books and reality but she’s going to try to make her life a little like her favorite book. It will never be your fault if she does.

Lie to her. If she understands syntax, she will understand your need to lie. Behind words are other things: motivation, value, nuance, dialogue. It will not be the end of the world.
Fail her. Because a girl who reads knows that failure always leads up to the climax. Because girls who understand that all things will come to end. That you can always write a sequel. That you can begin again and again and still be the hero. That life is meant to have a villain or two.
Why be frightened of everything that you are not? Girls who read understand that people, like characters, develop. Except in the Twilight series.
If you find a girl who reads, keep her close. When you find her up at 2 AM clutching a book to her chest and weeping, make her a cup of tea and hold her.You may lose her for a couple of hours but she will always come back to you. She’ll talk as if the characters in the book are real, because for a while, they always are.
You will propose on a hot air balloon. Or during a rock concert. Or very casually next time she’s sick. Over Skype.
You will smile so hard you will wonder why your heart hasn’t burst and bled out all over your chest yet. You will write the story of your lives, have kids with strange names and even stranger tastes. She will introduce your children to the Cat in the Hat and Aslan, maybe in the same day. You will walk the winters of your old age together and she will recite Keats under her breath while you shake the snow off your boots.
Date a girl who reads because you deserve it. You deserve a girl who can give you the most colorful life imaginable. If you can only give her monotony, and stale hours and half-baked proposals, then you’re better off alone. If you want the world and the worlds beyond it, date a girl who reads.
Or better yet, date a girl who writes.

Don’t you agree that its beautiful, A simple way to talk about the girl of my dreams. 🙂 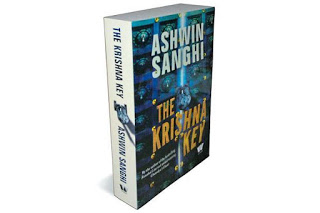 The Krishna Key by Ashwin Sanghi is a rather refreshing break away from Indian contempory writing, a fast paced adventure with twists turns and amazing u-turns is what the indian litreature needs. We could do well with a couple of magnanimous hot cakes of our own other than the usual mystic stalwarts. Sanghi’s The Krishna Keyis a slow adventure that unfolds in the mystic realms of India and its fully loaded.

The story evolves from the discovery of four Indus valley seals and the world of unprecidented knowledge that they are meant to unlock. Pepped with some gruesome murders, malevolent conspiracy theories and an uncanny resemblance to several dan brown novels, The Krishna Key by Ashwin Sanghi is a true thriller. The story moves through simultaneously through both ancient and modern India along with its protagonist Mr Saini, who as in all archaeological thrillers is a history professors. He is a true ‘European hero’ in a very Indian novel who makes sure that he gets a taste of everything that’s there to taste in this story, literally everything. 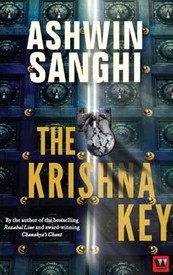 The story is creative and refreshing yet the narration is far from being perfect. The greatest short coming of the story would be its beginning which is dangerously slow that it takes perseverance to reach the good part. Although it  gives the reader the feeling of a chewed Dan Brown novel at the initial phase, the story quickly picks up and metamorphosizes into a true thriller and by mid way it is gripping. The story takes you through the breadth and width of India following various clues and leaving behind a rather bloody tail and a lot of confusion.

The next big disappointment occurs at the end where the author leaves the readers feeling ‘ditched’. The ending is lackluster and does not do any justice what so ever to hype and expectation that the author has created through out the story. The problem is that its too surreal when the reader craves for something solid and substantial.

Then there are a couple of glitches in the story which involves a drastic change in the character of the characters and a rather poorly executed love story entwined into the main plot. One minute they are just acquaintances and the next they are in the bed making love. Nobody saw the love happening, what must otherwise have added some sugar to the feisty tale leaves behind a rather sour taste in the readers mind, after all no one expects a 50 something Indian college history professor to turn into a stud over the span of 4 pages. The love story was unwanted and unnecessary.
Setting aside these two disappointments the novel is really good and can be easily ranked as one of the few very good Indian authored book that I have read in the last couple of years. I would suggest that the any one who can get your hands one just grab it. Aside from a few glitches I pointed out, the story is fabulous, gripping and very well researched.

This review is a part of the Book Reviews Program at BlogAdda.com.