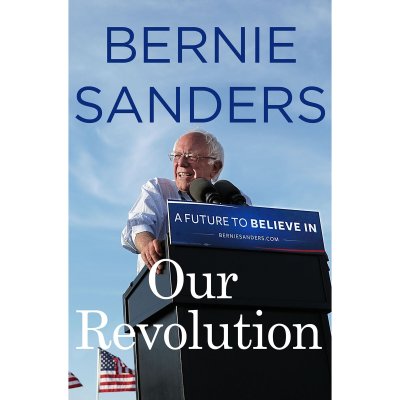 It is not often that a book review becomes more a review of the author than the book itself; albeit they overlap nonetheless to a certain extend. Bernie is a man who needs no introductions any more; little over an year ago that was hardly the case. Over an year and a half ago when he was just the obscure senator from Vermont this was hardly true. This book chronicles the remarkable journey of Bernie Sanders and the astonishing rise of democratic socialism in a capitalistic United States.

In this book, Bernie in his own unmistakable words takes the reader through the 2016 Presidential primary and its numerous turning points. He explains how he broke out o f his own obscurity in the wider public space and into the icon that he is today. It covers everything, his intends, his motivations, his rallies, town-halls, the battles lost the victories won and above all else his convictions. Our revolution offers less to the sanders fan than the general public; to the uninitiated the book is very much a great window into the world of democratic socialism.

As an external observer, some one not from the States, Bernie and what he stands for is not as revolutionary as it appears to the Americans, universal health care and free education are hallmark of most progressive regimes. This doesn’t undermine his effort to redeem his nation and bring it to the forefront of human development.

In short this is a book that is not necessarily a must read for all but is nevertheless a good book that offers a brief glimpse into the rot in the United States political system.