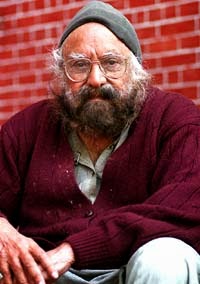 It is always a sad and unfortunate event that a wordsmith of his caliber must pass away but as the inherent nature of things goes one who is born must one day die. He doesn’t have anything to complain about though for he got a pretty long quantum of quality life. The very best any man can do is to leave a mark on the face of earth and be remembered and be alive through history. The honorable Khushwant Singh, the man with much malice has did just that, he may have left his body and unified with the ultimate but a part of him he left in each one us, each one of us who had enjoyed his jokes and cherished his Train to Pakistan or The Company of Women.
The first book I read of his was hood book of jokes, they were all hilarious and one’s whose humor you could savor for a long time after the first reading. Much later did I come across his prime jewel ‘The Train to Pakistan‘, to read that book was an entirely different and surreal experience. A book that brought out the reality of partition and the things it left broken in its wake. The least of his books that I read was ‘The Company of Women‘ and yet again a different book, one that me to look at things differently of what the company of an women meant to me.
Shri Khushwant Singh Ji had touched me in his own unique way and his literature and his ideology of vocal and objective expression of difference has influenced me a lot in my journey. There was a time I wished I could meet him and get his autograph, but that will never be I guess. Yesterday India lost one of it’s very best writer and columnist and I grieve along with the nation at our combined loss.